This is a series of posts which will develop the required material to present the Grothendieck spectral sequence, a few applications of it in algebraic geometry(Lerray sequence, sheaf cohomology etc.) and some other categorical nonsense. This post is meant to be a light glimpse into derived functors and not a full introduction.

I’ve wanted to post this for a few months but unfortunately I overestimated how much free time I would have in my first semester of college(hurrah!). At one point, I totally forgot that I even maintain a blog! That’s why I haven’t posted for about 5 months. The title of my blog is now officially fraudulent. There were many new things(both math-related and otherwise) at UT Austin that I wanted to explore in my first semester so I could be forgiven for putting aside my blog. I think I’ve realized that it is really just a matter of consistency. If I do something regularly, I’ll stick to the routine. So maybe, the title of the blog is more aspirational than it is real.

Anyways, enough of the nonsense. Though the Grothendieck spectral sequeuce encodes a lot of data(like all other spectral sequences),it is actually surprisingly simple to motivate and feels almost ‘natural’ to construct. But I suppose that is really indicative of the Grothendieck’s spectacular reformulation of homological algebra that has seeped into modern textbooks that makes it feel so ‘natural’. It is truly a beautiful sight to witness how derived functors lead to this elegant construction.So first, let’s set up the machinery.

is said to be an injective object if for every morphism

, there exists a morphism

such that the diagram commutes. 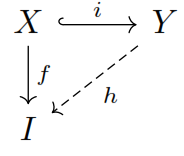 In the abelian category setting, the importance lies in the fact that

is exact. If an injective object is at the beginning of a short exact sequence in

has enough injectives if for every every object

, there exists a monomorphism

for some injective object

An injective reslution of an object $X \in C$, an abelian category is a resolution

are injective objects. In particular, this is a quasi isomorphism of chain complexes in

is an abelian category. Consider a short exact sequence in

is the Hom functor.

is known to be right exact. Many of these facts and their proofs can be found in many standard texts on commutative algebra or homological algebra. Some of the arguments in these proofs tend to be quite arduous to work through. An easier way to prove it is to notice that the functors are adjoint and show the equivalent statement that Hom preserves limits which is not too difficult. Taking the dual, yields the statement for tensoring and infact, it yields the completely general version which states that left adjoint functors preserve finite colimits using the Yoneda Lemma. See my other post on adjoint functors if you wish to learn more.

The point of derived functors(which I’ll shortly introduce) is to take these ‘incomplete’ exact sequences where we’ve ‘lost data’ to try and construct a long exact sequence. Remember that chain complex

which measures how far the sequence is from being exact. ALL the data is in the chain complex itself and the entire process of computing homology/cohomology is just a formalization which turns out to be quite handy. In the same manner, one should treat derived functors as a comfortable formalization using the data we possess. For an object

, we know just one thing:that there is an injective resolution:

for example) and apply it to the injective resolution to get

upto canonical isomorphism. A proof of this can be found in any standard textbook on algebra in the homological algebra section(Aluffi, Dummit and Foote;I think Hatcher also proves it for the dual case in the section on cohomology). Let’s take a closer look at this sequence. Since

is left exact, we get the following exact sequence:

is exact, then the all

would be trivial for

! I guess you could think of this as a way to encode approximation just like in homology/cohomology.

is a short exact sequence in an abelian category

is a left exact functor, there is an LES

The proof will be deferred to the next post with discussions on its dual, other theorems and special cases such as Ext, Tor.

This blog is dedicated mostly to pure mathematics though I occasionally post some CS-related stuff too. Problems are posted about once or twice a month too.